Giardia is one of those illnesses that is unforgettable for pet owners once they have experienced it with their pet. Today, here on the Leesville Animal Hospital blog we want to talk a little bit about this parasite for those of you who have not experienced it first hand.

Giardia and Your Pet 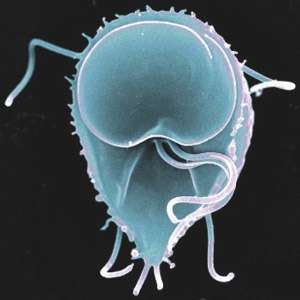 Giardia is a parasite that can infect humans, dogs, cats and a wide range of other animals as well.

Can I Catch Giardia From My Dog or Cat?

This microscopic intestinal parasite is most commonly seen in humans, dogs, and cats, however, and the strain that affects humans usually differs from that which affects our pets. With that said, there is a small possibility of contracting this parasite from a pet so it is important to get your pet treated as soon as possible and to maintain good hygiene in the meantime.

How is Giardia Spread?

Giardia is spread through contact with the infected feces of carriers of the parasite. Once the parasite is ingested an individual, dog or cat soon exhibits symptoms.

– Playing in soil that has been contaminated.

Preventing the Spread of Giardia

It is important to minimize the risk of spreading the giardia parasite if your pet becomes infected. Some ideas to help to reduce the chance that giardia will spread include:

– Wash your hands frequently and thoroughly.

– Always wear gloves when gardening or use a clean barrier when picking up after your infected pet.

– Regularly clean and disinfect items that your pet uses frequently.

– Quarantine a section of your yard for infected pets to urinate and defecate to prevent the spread of the parasite to healthy pets and family members.

REMEMBER: Giardia can survive in 39.2ºF soil for up to 7 weeks and in 77ºF soil for a week! In the water below 50ºF, it can survive for 1 to 3 months and in water 50ºF or above that lifespan is diminished accordingly.

There are a number of symptoms associated with Giardia infection, these include:

– Diarrhea which carries with it a terrible smell.

– A greenish tint to your pet’s diarrhea.

– Hints of blood in your pet’s diarrhea.

– Visible mucous in your pet’s diarrhea.

Is Giardia Dangerous for my Pet?

Giardia is generally not a life-threatening condition; however, it is one that should be addressed by your pet’s veterinarian. If you have a young immature pet that shows signs of infection, however, then the condition could prove to be fatal quite quickly without medical intervention.

How is Giardia Treated?

Giardia cannot be diagnosed by anyone other than a professional veterinarian. In order to diagnose infection, your vet will take a fecal sample to check for the presence of giardia cell proteins or tiny cysts that are present with infection. Occasionally veterinarians will also take a blood sample and perform a “SNAP test” designed to detect giardia antigens.

If your veterinarian finds that your dog’s symptoms are consistent with giardia and/or their testing provides proof of infection they will begin a course of treatment. Most commonly infected pets are prescribed a course of antibiotics or anti-parasitic drugs or a combination of both. Treatment courses generally last for five to seven days.

Depending on how severe your pets giardia infection is, your pets overall health and complications that are arising from symptoms, your vet may prescribe additional treatments. One of the most common “additional treatments” for young animals is an IV of fluids to reduce the effects of dehydration.

Can My Dog or Cat Die From Giardia?

Yes, your dog or cat can die from giardia but it is unlikely if you consult a veterinarian as soon as you notice symptoms in your pet. In some cases, such as with older pets, immuno-compromised pets and very young pets, the infection can simply contribute to too much stress within the body and cause it to shut down. This is not the most common outcome of giardia infection, however.