One of the biggest questions that dog owners at our Raleigh animal clinic, Leesville Animal Hospital, have pertaining to ticks is how to remove them. With routine monthly preventatives, it’s still possible for our pets to have the odd tick hitchhiker, but removal isn’t too tricky as long as it’s done correctly. Once in a while, however, we have a client who calls us in a panic saying “I’ve left the tick’s mouthparts in my dog, what next?” So today we’re going to take a quick look at what happens next… 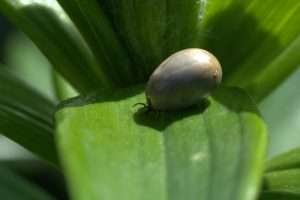 Ticks aren’t usually that tricky to remove for experienced pet parents, but if, like some others, the very sight of one sends you screaming and running for the hills things can get a little more complicated…particularly when things don’t go exactly to play!

It is always important to remove the entire tick (mouthparts particularly) from your pet. When a tick attaches itself to your dog it buries into the skin and as it feeds on your pet’s blood, the body gets much larger. This increased body size can make it difficult to see the head of the tick and it makes a much easier target to grab when it comes to removal. Unfortunately, grabbing a tick by the body can result in the head being left behind and buried in your dog’s skin.

There are more than a few myths going around about what might happen if you leave a tick’s head behind and take away the body only. As the word “myth” suggests, 99% of these “warnings” are simply not true. What may happen when you leave a tick’s head behind, however, is that your dog can develop an infection at the site of attachment. This infection can be uncomfortable at best and festering at worst, so it’s important to address any tick heads left behind ASAP!

When the Tick Head Gets Left Behind

So, if one of those bloodsuckers get buried so deep that when you try to remove the tick the mouthparts get left behind, what should you do?

Firstly, if you are uncomfortable removing a tick yourself or if you feel that the tick is too deeply buried in the skin to be safely removed, seek assistance from your local Raleigh animal clinic. Owners will often tell us that they feel silly coming in just to get a tick removed, but we would rather you come in anytime you have questions about your pet’s health!

Getting Rid of the Mouthparts of the Tick

Now, if you have already attempted tick removal and are now looking at the tick’s mouthparts in your dog’s skin take a pair of sterilized tweezers and carefully remove what remains of the tick. DO NOT DIG FOR IT!

Many dog owners are not comfortable trying to remove the tick mouthparts from their dog and we always recommend coming to see us if that is the case. But if you are in a pinch, stay calm, use sterilized tweezers, and gently remove the remaining parts of the tick from your dog.

After removal, make sure that you sterilize the area of your dog’s skin where the tick was attached and place the tick in a small container of isopropyl alcohol to kill and preserve it for testing should your dog begin to display symptoms of illness.

If you have any concerns over a tick being attached to your pet and you live in Raleigh or the surrounding areas, don’t hesitate to drop by our Raleigh animal clinic, just give us a call at (919)870-7000 to let us know you’re coming!